Washington [US], May 13 (ANI): Elon Musk, the CEO of Tesla Motors, recently announced that the company has stopped accepting bitcoin as payment for its cars out of concern- that it will contribute to greater consumption of fossil fuels.
As reported by Mashable, the business magnate and SpaceX founder shared a statement on Twitter on Wednesday about the same. Tesla had only just started accepting bitcoin in late March. 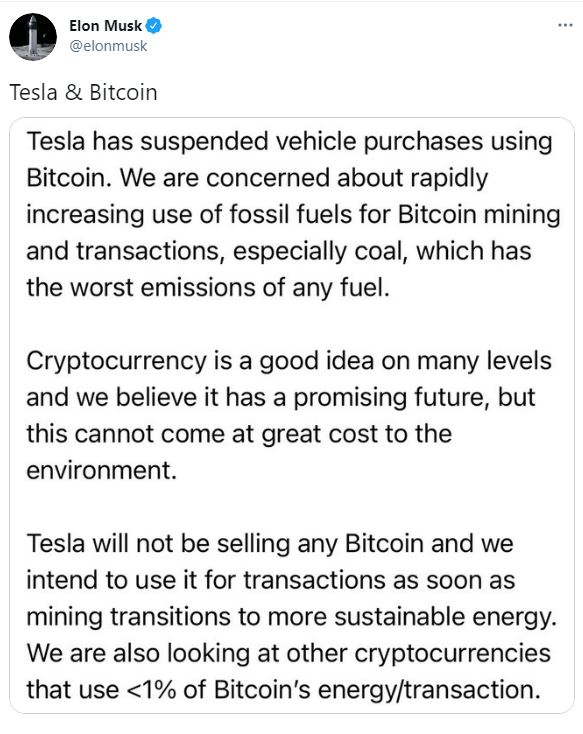 The 49-year-old industrial designer also said that Tesla will no longer sell any more of the USD 1.5 billion stashes of bitcoin it purchased earlier this year. Tesla sold some of that bitcoin in the first quarter of 2021, which wound up helping pad the company’s quarterly profit figures.
According to the statement, Tesla says it would resume accepting bitcoin (and would consider selling more of it) once the process of mining bitcoin “transitions to more sustainable energy.”

The company is also “looking at other cryptocurrencies that use &lt;1 per cent of Bitcoin‘s energy/transaction.” As of this writing, Tesla‘s website indicates it will still accept Bitcoin for transactions.
“Cryptocurrency is a good idea on many levels and we believe it has a promising future, but this cannot come at great cost to the environment,” Musk’s statement reads.
Mashable quoted reporting an estimated that Bitcoin uses up as much electricity annually as the Netherlands. All that energy comes with a huge carbon footprint and there’s no simple fix because the blockchain that the cryptocurrency is built on is purposely energy inefficient. That clashes with Tesla‘s mission to “accelerate the world’s transition to sustainable energy.”
Musk has also hyped another cryptocurrency, Dogecoin, which Tesla has not invested in.
Musk has called Dogecoin, which was invented as a joke to satirize bitcoin, his favourite cryptocurrency and “the people’s crypto.”
The cryptocurrency’s worth plunged after Musk called it a “hustle” on Saturday Night Live. Bitcoin‘s value has similarly plunged about 4 per cent after today’s Musk tweet, to USD 52,593.46 at 6:21 PM ET from USD 54,829.14 at 6:06 PM, according to Coindesk. (ANI)